The Android NDK is a set of tools for building native C++ applications for Android. BugSplat recommends using Crashpad to handle native crashes in Android NDK applications. Before getting started with this tutorial, please review the AndroidCrasher application to see an example BugSplat integration.

To build crashpad you'll first need to download a copy of the Chromium depot_tools. Once you have downloaded depot_tools, you'll need to add the parent folder to your system's PATH environment variable. After adding depot_tools to your systems PATH, run the following commands to download the Crashpad repository:

Next you'll need to generate Crashpad build configurations for each Android ABI your application supports. You can view the source of gyp_crashpad_android.py to see a list of supported ABIs. Take note of the --api-level value you use here as you'll need this information when configuring your project. The following command will create a Crashpad Android config for the x86 ABI:

After adding the include directories, you'll need to add the Crashpad static libraries to your project. You'll need to add a set of Crashpad libraries for each ABI your application supports. From the /crashpad/out/Debug/{{ABI}} directory you'll want to copy the client, util and third_party/mini_chromium/mini_chromium/base folders to app/src/main/cpp/crashpad/lib/{{ABI}}. 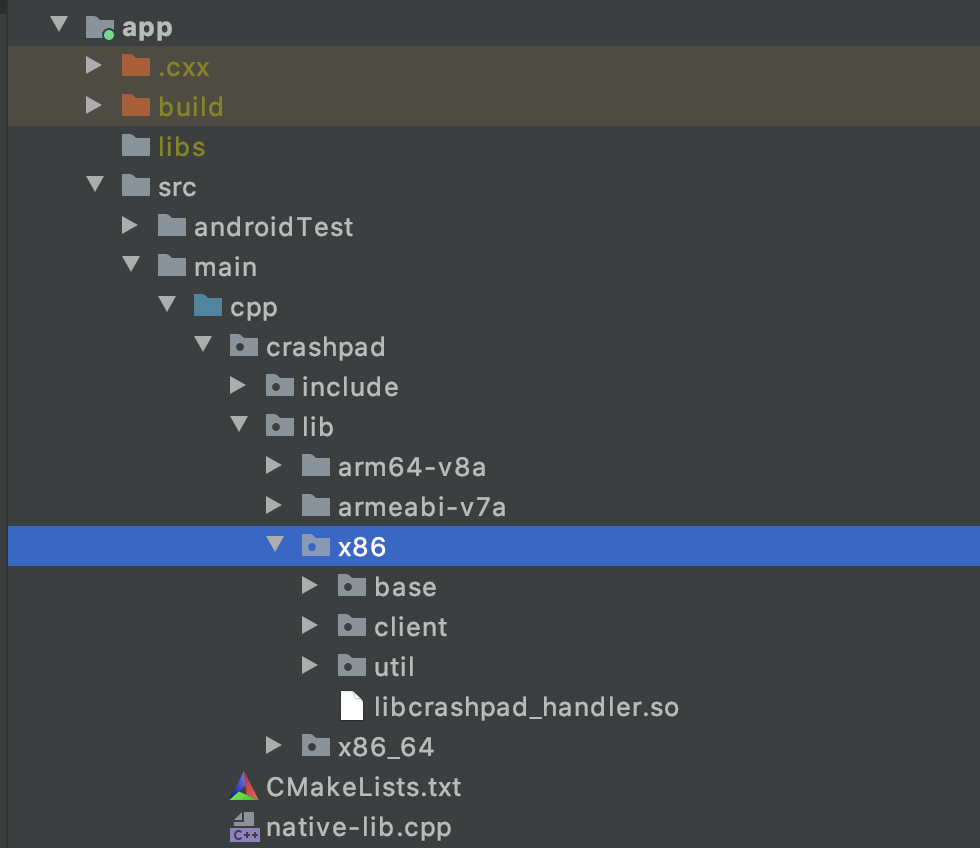 To test the attachments feature, use Java or Kotlin to write a text file. The following is a Kotlin snippet that creates a file attachment.txt:

You can also run the Linux version of dump_syms using compatible Linux emulator on OS X or Windows. Examples of how to run a Linux build of dump_syms on OS X and Windows can be found in the tools section of the AndroidCrasher repository.

If you're developing on an OS X or Linux system, build the Breakpad tool symupload on your local system. Upload the generated .sym file by running symupload. Be sure to replace the {{database}}, {{application}} and {{version}} with the values you used in the Configuring Crashpad section:

If you're developing on Windows, symupload will not upload your Android .sym files. As an alternative, the AndroidCrasher tools folder provides and example PowerShell script that will upload .sym files to BugSplat.

Force a crash in your application after Crashpad has been initialized:

After you've submitted a crash report, navigate to the Crashes page. Click the link in the ID column to see the details of your crash report. The following image is from our sample AndroidCrasher application: